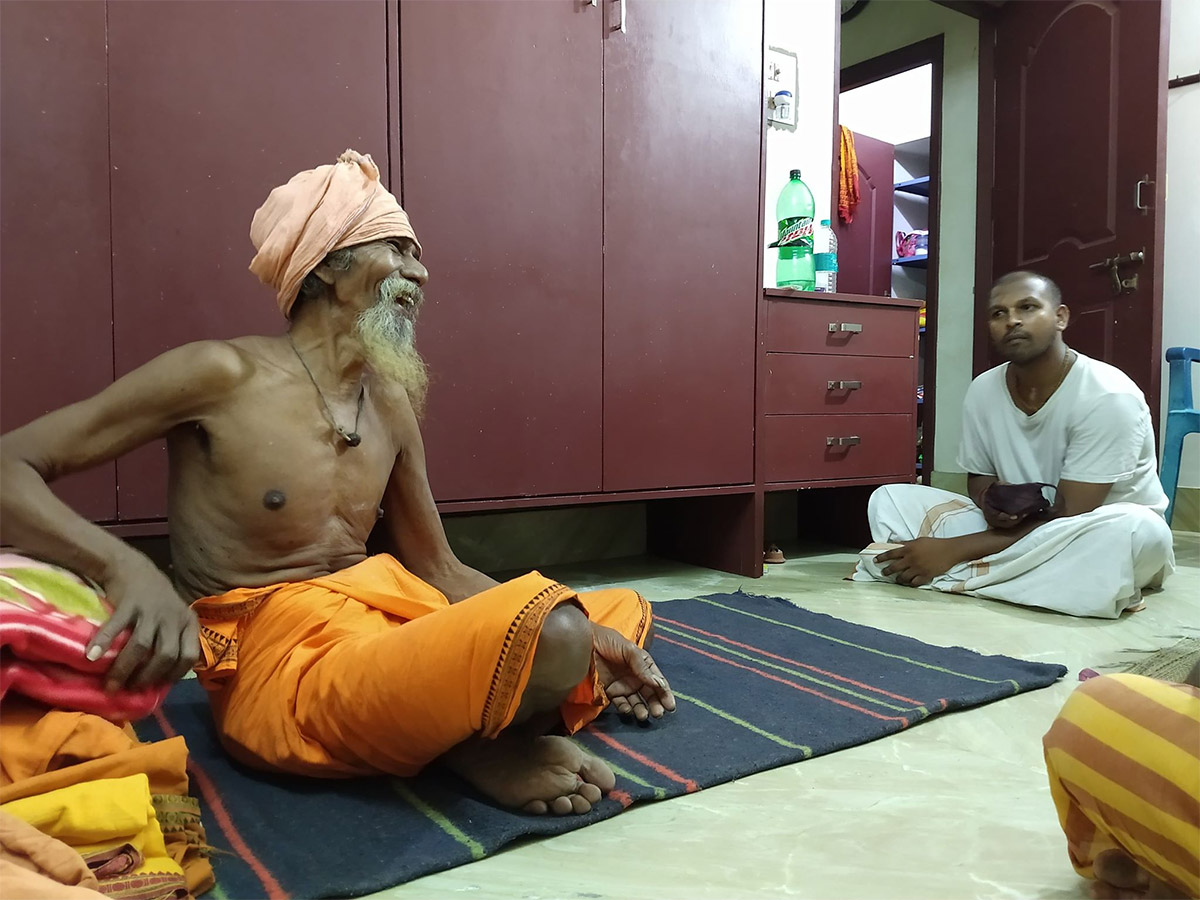 98 year old sadhu Brahma Chaitanya Das, who is known in Odisha as Chakratirtha Baba is visiting our temple in Chennai on his way to Rameswaram for tirtha yatra.

Baba spent his entire life alone in the remote forests of Orissa doing sadhana as ordered by his guru. One day his guru lit an akandha dhuni (yagya) and told him to watch the fire as he went out. He told him he would be back in 15 days time. 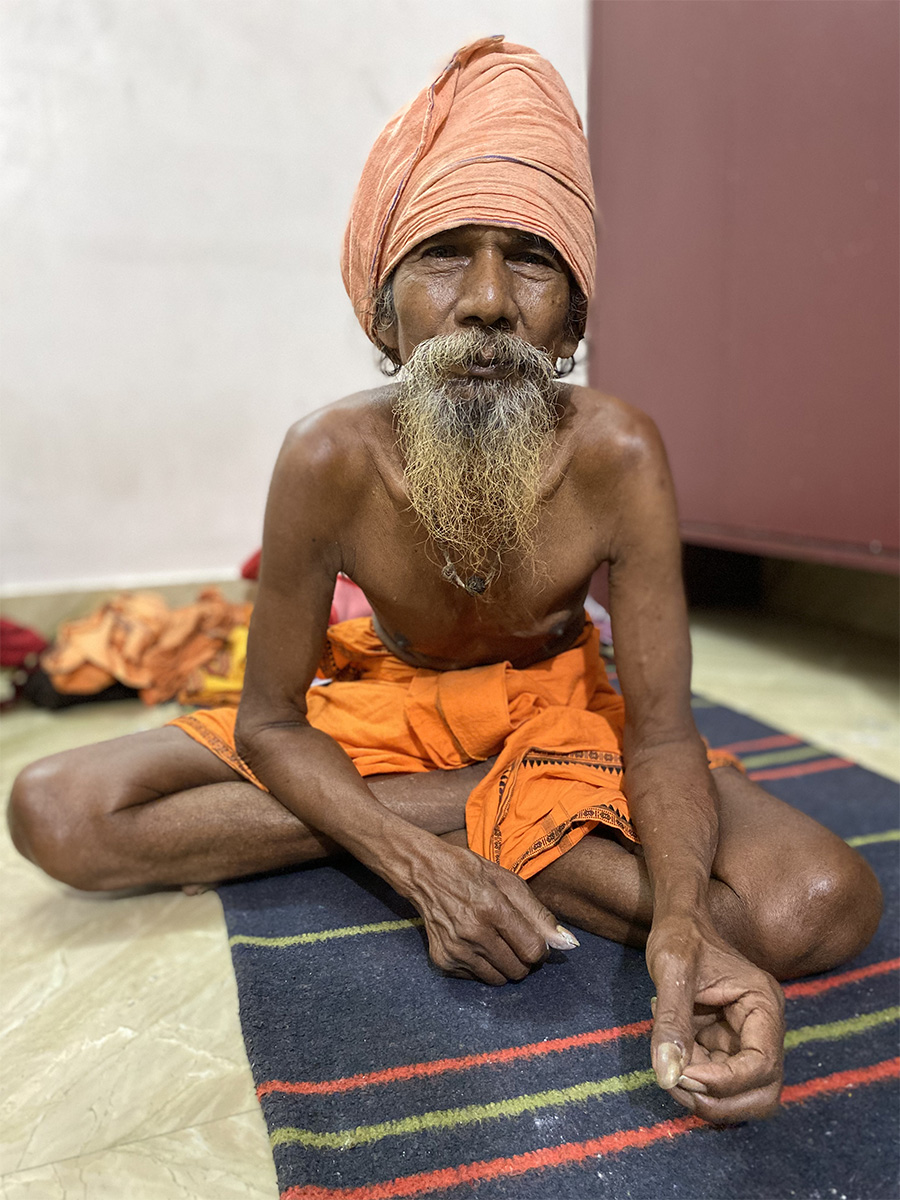 This sadhu sat alone in the forest waiting for him to come back, with no food or possessions. At the time, this was one of the most remote places in India, deep in tiger infested forests of Odisha. Even today it is one of the largest tiger reserves in India.

He lived alone in this forest with no house, no food and no one else around to help him. He sustained himself by collecting wild roots in the forest, which he knew from his tribal background. He kept waiting for his guru to return, and finally one day his guru did return, but it was 15 years later.

He kept the sacred fire burning alone in this remote forest for 15 years without questioning why his guru had not returned on time. 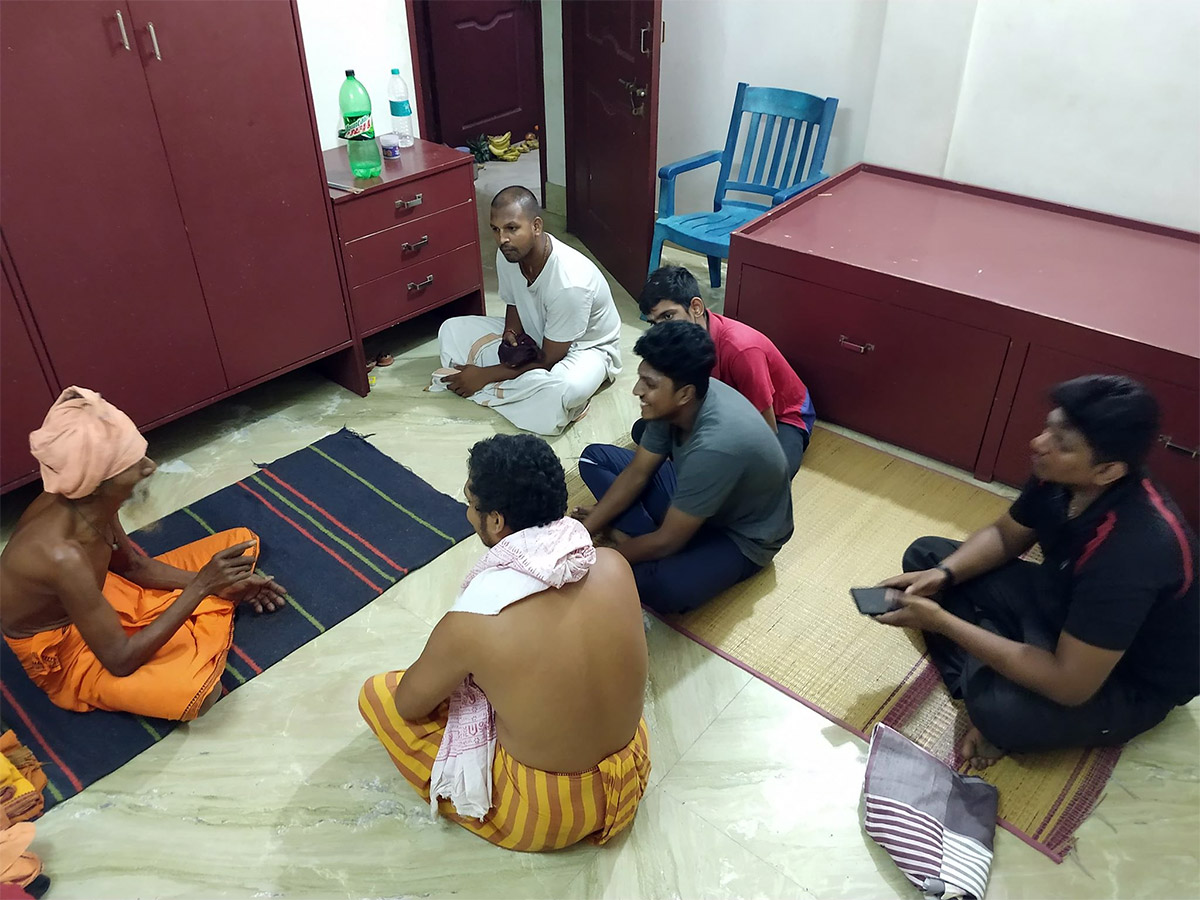 There is a saying among sadhus, “bara varsha korile seva guru kohile kichi debha”. The meaning is that, “After performing service for 12 years, my guru said he will give me something.” This indicates that the guru first tests the disciple for twelve years to see if he is sincere. After passing all the tests of the guru, when the guru is convinced and pleased with the disciple, he gives him something, that is the real guru diksha which leads to siddhi. 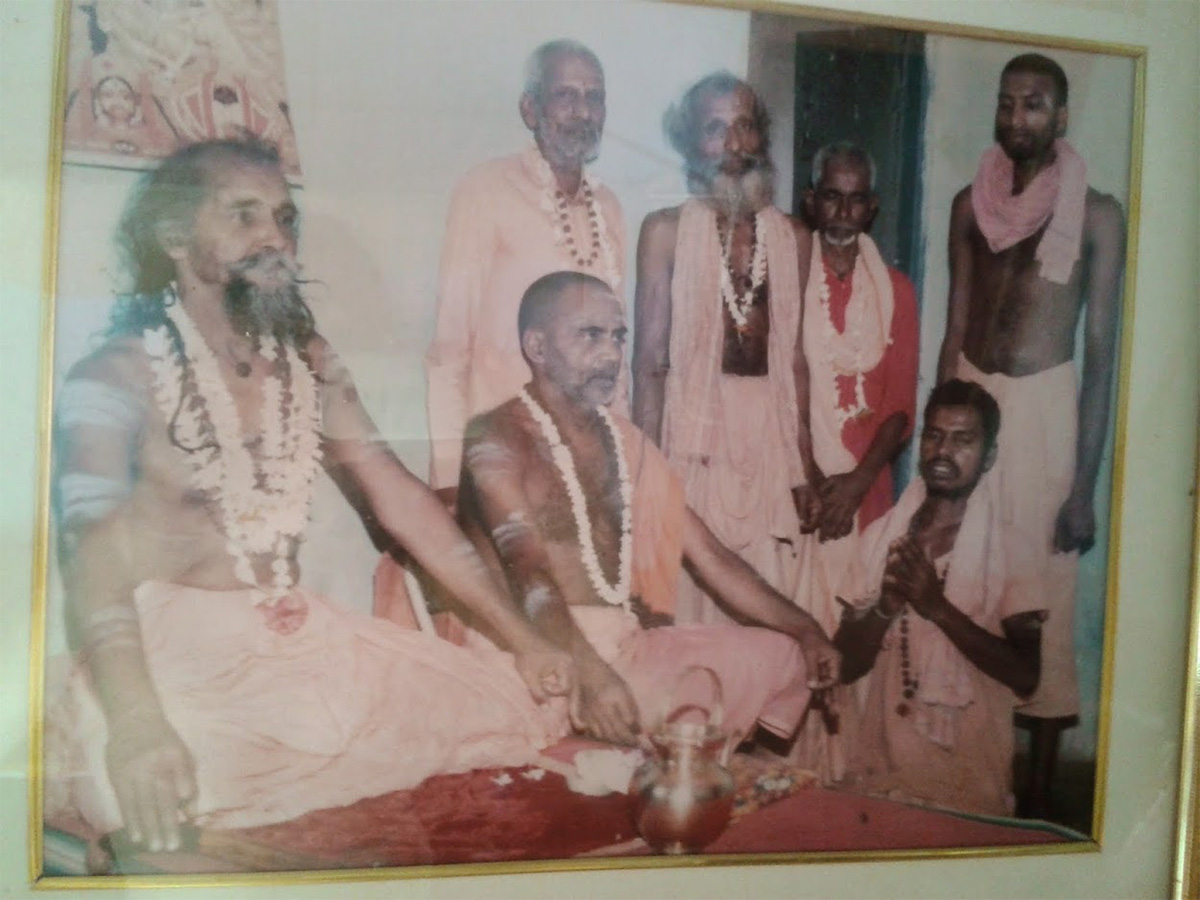 Rama Baba, the guru of Chakratirtha Baba, is on the left.

As a child his father donated him to Mahima Alekha sampradaya (Joranda Gadi), and later he took sannyasa diksha from a very powerful siddha named Ram Das Baba (Ramananda Saraswati of Jharkhand), receiving the name Brahma Chaitanya Das. From that time he has remained in the forests of Odisha carrying out the order of his guru to maintain the sacred fire. 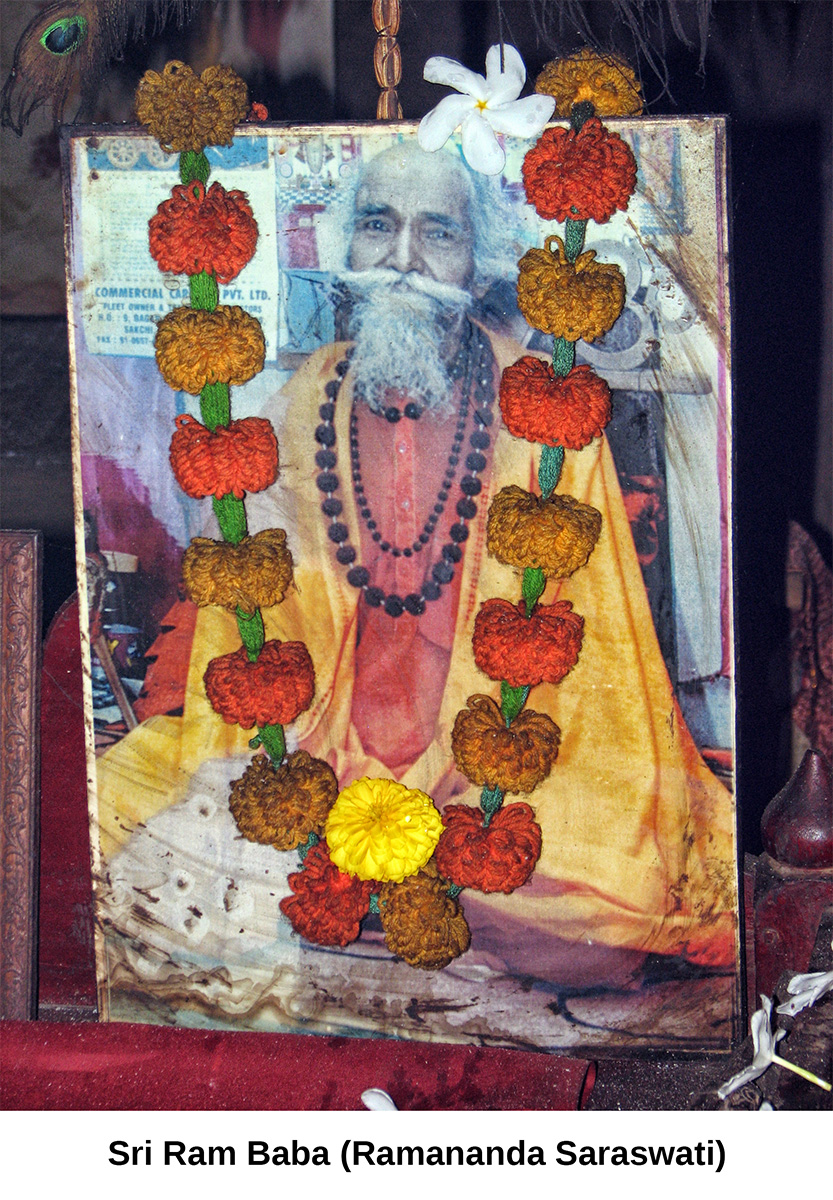 In 2016, with help from many readers of our website, we were able to build rooms for the sadhus staying there. You can read about that here.

For many years we have been asking him if we can take him on tirtha yatra to chardham (Rameswaram, Dwaraka, Badrinath and Puri), as he has spent many decades in the forest serving pilgrims and serving his guru’s akandha dhuni, and has not been able to visit the holy places of India which most sadhus have visited. It actually took me 15 years to convince him to come along on tirtha yatra. Every year when I asked to take him on tirtha yatra he would refuse saying he had to watch the sacred fire, and that anyway all tirthas are present in the tirtha he stays at in the forest (Chakratirtha). 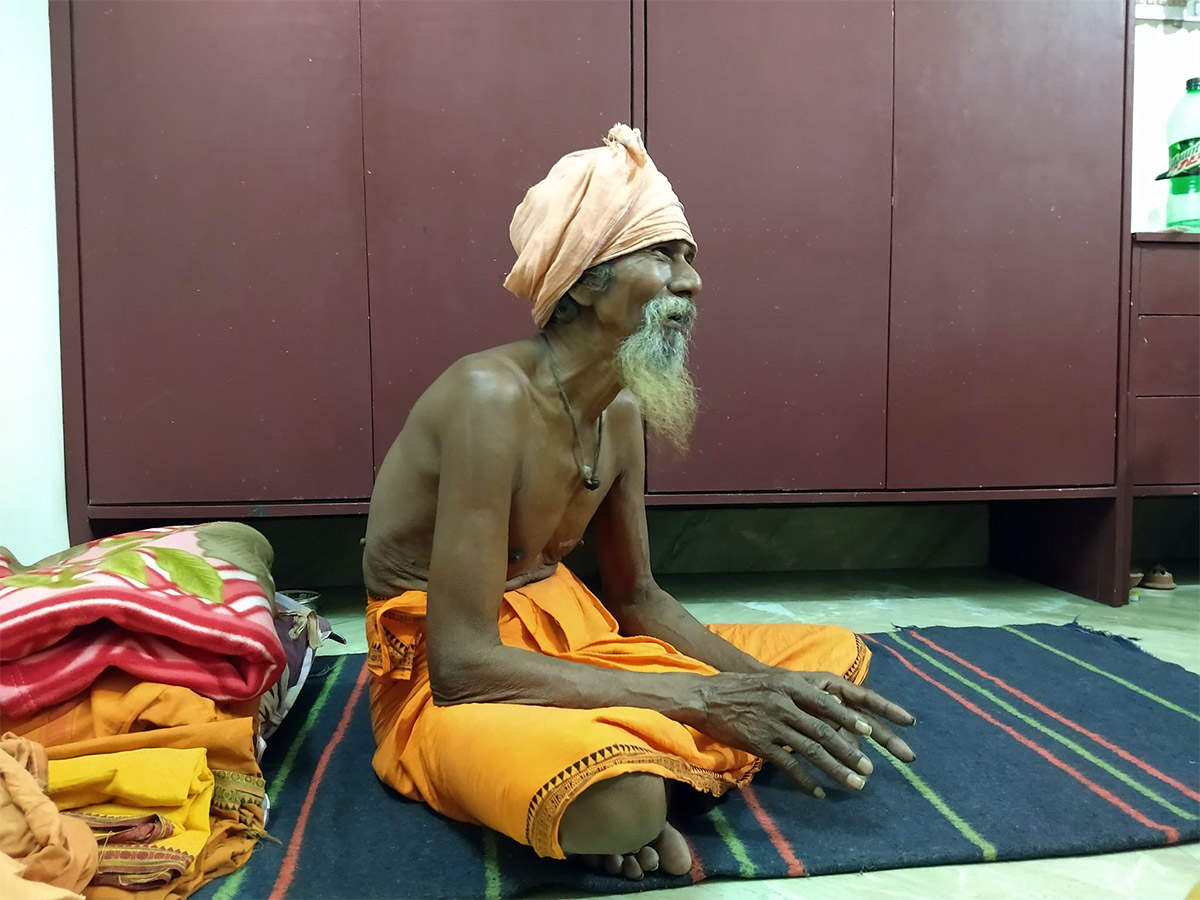 In the last few years as he became older he became open to going on tirtha yatra, saying his guru had told him he would take him on chardham yatra, but his guru entered samadhi before fulfilling this promise. Finally this year he committed to going after 15 years of me requesting him. He never wanted to leave his guru’s dhuni or the service his guru instructed him to perform, even for a few days to go to sacred tirthas.

This month we will take him throughout South India to visit the ancient temples culminating in Rameswaram. Later in April, when the weather is warmer, we hope to take him to Badrinath, Kedarnath and other tirthas in the Himalayas. 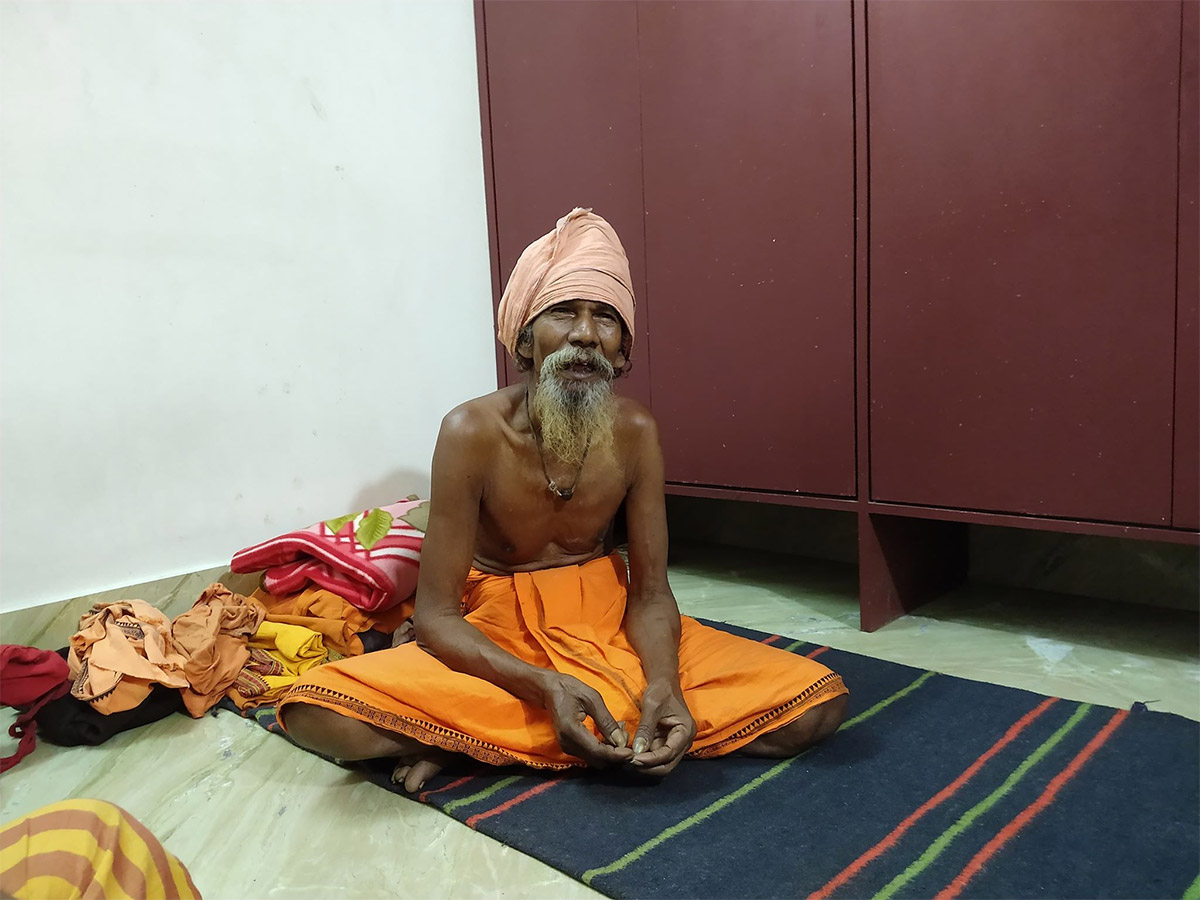 Many years ago when he was suffering from poor eye sight due to cataract problems I asked him if we could take him for surgery to improve his eye sight. He replied, “My guru has given me these eyes, why should I change them. If my guru chose to give me eyes like this, I will keep my eyes like this.” Such is the amazing guru nishtha of Chakratirtha Baba.

If you are in Chennai and would like to meet Chakratirtha Baba, he will be staying at our Panchamukha Hanuman temple located at Taramani, Chennai for a couple days on his way back to Odisha from Rameswaram. For any questions you can call the temple number 8300181008 and speak to Sainath. 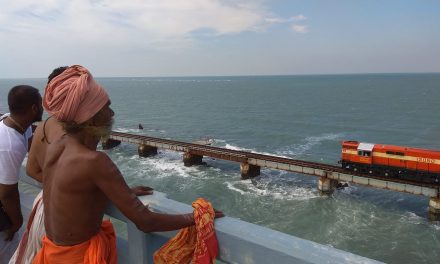 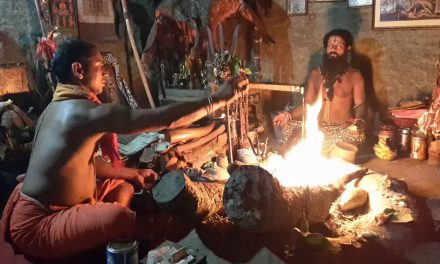 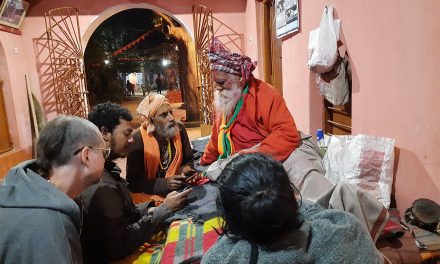 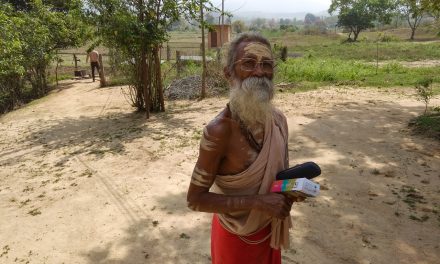